When testcomplete will auto refresh the test object?

When testcomplete will auto refresh the test object?

When I use testcompete 12 to test desktop App, sometimes it need me refresh the object and it can still run the next script. Sometimes it don't need me to refresh. So my question is when testcomplete will auto refresh the test object? Trigger the click event?  Add checkpoint ...  The help doc of refresh method can't give me this answer. So I ask for your help. Thanks!

To be more specific.

Are you talking about refreshing an object from an object tree or NameMapping repository?

No,  I mean during running the case, for example,  you click the OK button, other dlg appear, it still has the Ok button. But test case may be failed, because the TC will notice us the OK button is invisible.

To be more specific.

Are you talking about refreshing an object from an object tree or NameMapping repository?

In my opinion, in the example you wrote about, it can happen like this:

1) If you use nameMapping then TC searches for information about the object in NameMappingInfo and uses the data stored there to work with the actively called object in the script.

2) If you don't use nameMapping (and I would recommend using it, though), you refer to objects directly via Sys.

In this example, in the "Object Browser" tab you have a list of actively accessible objects and t items related to them.

Personally, I don't know how Testcomplte reads objects from the operating system I work on. Maybe someone from other members of the forum has analyzed it before but personally I think it will be "stuck" in the code of the TestComplete application itself and you won't find it in the documentation.

If weaving, it will be answered by technical support.

Thanks！I Know this option but never use. And I have check the test excute. It can't find this option. For the same env, I won't to use it. But I will have a try. If it is valid for my question, I will notice community members. Thanks!

Yeah， the tested object in my namemapping and I test it in my cases, meeting this issue.

it's not good option when run project. Because it will stop cases and popup dlg: Edit namemapping dlg 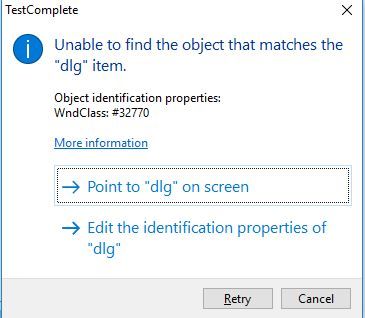 Can you verify that you have all these tags checked in the options?

I am uploading the screen below.

If you have mapped this object in the repository and let TestComplete update the object data by itself, the window will not appear. 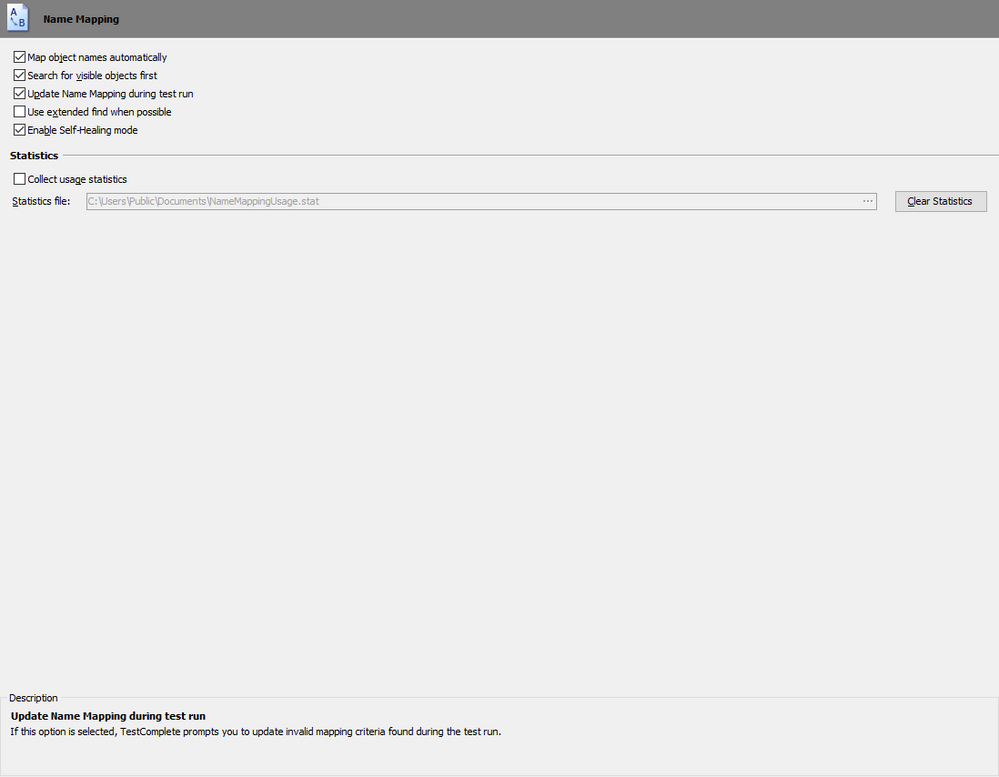 To be more specific. In TCv.12 there is no "Healing mode" so ignore this value.

Last time I check off 3rd selection, the window appear.

So I will uncheck it for project.

From help doc, I find it:

Run your tests. Whenever TestComplete cannot find a mapped object that a test operation uses, it will pause the test run and suggest fixing the identification problem

Can this window be dynamically searched in a script based on any values?

I mean, your script comes to the moment of interaction with this window.

The script is currently stopping because you cannot find the right window.

If you use the .findxxx() method and you search for this object, will it help you?

I mean that in the .find method (with a slight modification) you can search for several objects at once.