Retry based on AssertionStep status

Retry based on AssertionStep status

Intro here, the actual problem is below the line. We are currently working on a retry-mechanism that re-runs a specific interval of testSteps upon failure.

In the given picture the test would transfer a file to a server, which extends an already existing list with new data. Because the processing system is outside of our scope we can only wait and guess when the server is done ingesting and processing the data. In the current project we wait for a static 2 Minutes (and it still takes longer sometimes).

The pure logic is rather basic and would look like this:

I am currently crawling through the API to figure out why the assertions within the assertionStep don't want to run, but I'd like to see if someone can provide a solution.

Hope it will Help 🙂

pb1
Contributor
In response to HimanshuTayal

I can guarantee that the step called has assertions can would lead to a failure, I am currently assuming that calling .run() just doesn't actually execute the assertions, so the "empty" AssertionStep is being executed and 0 assertions = 0 fails, so the step itself passes.

Community Hero
In response to pb1

Hope this will work 🙂

pb1
Contributor
In response to HimanshuTayal

Thanks for the help so far, but sadly your code produces a "PASS" as well.

pb1
Contributor
In response to pb1

At this point I am 100% sure that calling .run() on the AssertionTestStep does not execute any AssertionEntry.

I can not figure out how to emulate the actual testRunner, my best attempt to run the entries follows:

The problem right now is that assertRequest() requires the MessageExchange object, but I have no idea how to get the MessageExchange from the previous RestRequest, the API is very undocumented and after a day of digging I could not find a way to make it work.

Please keep the investigation going. Also, we would really appreciate it if you post your solution here that you get from Support. Thank you.

pb1
Contributor
In response to sonya_m

I managed to solve this specific problem, the opened support request shall remain open because I still suspect a problem with the .run() function.

Instead of trying to emulate the testRunner from inside the groovy step we now "drop an anchor" before the retry-cycle, run into the script and check the checkpoint status. If the status is FAIL we tell the testRunner to go back to the anchor via testRunner.gotoStep() - if the status is PASS we just let the TestCase continue on. Here is how that looks: 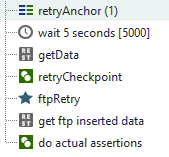 The anchor contains the number of remaining retry attempts, which are subtracted with each iteration by the ftpRetry-Script.

And here is the adapted ftpRetry function from the example.

Should have reconsidered my approach to the problem rather than trying to force the script to emulate the testRunner, oh well.