Help With Object Not Found Error

Help With Object Not Found Error

I do QA for a desktop application. This application has UI threads that are sometimes slow, which I believe is causing our nightly Test Complete tests to fail with "the object does not exist" errors.

Some important notes:
- In the screenshots of the errors, I can see the button/window/object which indicates that it exists, however TestComplete can not find it
- TestComplete keeps searching for the object, in a seemingly recursive fashion (see image below) 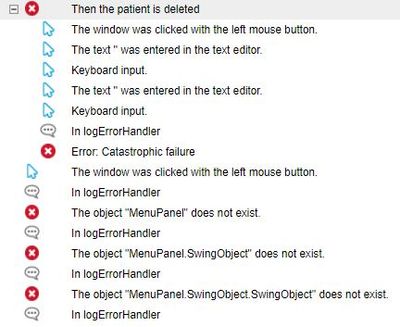 I have tried using the Aliases.myApp.Refresh() within the error handler and it does not help. I would like to avoid using delays between steps as that would make our tests too long. I also would like to avoid writing custom code which write the test name into a file and re-runs the tests that way, since the errors would still show up and fail the Jenkins job, which is what we use to run the nightly tests on a VM.

Any help would be very much appreciated!

I would start from figuring out what causes the 'Catastrophic failure' error. It might be an indication of some crash of/in the tested application or in TestComplete itself.

You may also consider to use .WaitXXX methods (WaitWindow(), WaitAliasChild(), etc.) to dynamically wait until the sought for object becomes available.

Hi @ddguy, have you tried implementing the suggested approach?

I will implement this soon and try it out, thank you for the reply.!

We'll be waiting for your results in this thread then. For now, let me mark Alex's suggestion as a temporary solution.