I started to use swagger with swagger-ui-express and swagger-jsdoc to auto document my existing api, which is written with nodejs and express (like described here - example).I came across a problem when I tried to add a $ref to an existing json schema file (that sits inside my project on the same directory as all my js files) on my annotation. 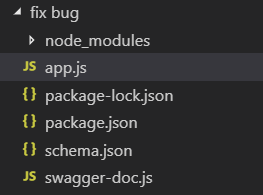 I wrote the local path(as writen above) and the absolute path, tried to use #, using many syntaxes and nothing worked, i keep geting the same error -

I looked the problem up online and couldn’t find any clear answer. I saw a solution that suggested I should put my schema on a server and access it with an url address and I prefer not to do it on this point.

Also, at some point I put the scheme into a variable and then put it in the $ref and it worked. The only problem was that the scheme included some inner refs to element in the same file and swagger didn’t even resolved those.

Is there a way to work with $ref in swagger-ui-express?

Please check if the following article helps you resolve the current issue:

Hey, I came across this article earlier and unfortunately, it wasn't helpful for my problem.

What can we recommend here?

Community Hero
In response to TanyaYatskovska
Not sure of the use case. Is version Swagger 2.0? or OAS 3.0?
Any ways, not tried swagger-ui-express ever.

Using swagger-editor and can use "$ref" in the swagger definition 2.0 and generate java code which is perfectly fine.

Community Hero
By the way, is it possible to show the swagger definition for review?

I'm not familiar with swagger-ui-express as it's not one of our projects, but it appears that it does not support $refs:

>> this module will only deal with one full swagger document

You'll probably need to use a preprocessor such as json-refs to resolve the $refs and then pass the full resolved spec to swagger-ui-express. You can find an example of using json-refs in the "Tools" section here: https://azimi.me/2015/07/16/split-swagger-into-smaller-files.html#tools