I'm new to Zephyr cloud so pardon is the issue seems obvious to you.

I've been using the ZAPI to certain endpoints as described in the documentation so far successfully but encountered a problem with some.

A most import feature we would like to implement is automated creation/update of test execution, not by a test manager, but ourselves using the code itself at the SetUp/TearDown stages of the test.

I was using them them same way I've been using the other endpoints and according to the documentation, but for the execution creation I have been receiving an error:

Searching the web I've seen this error has risen more than a couple of times and probably having something to do with the JWT generation but I'm not certain of that as i've followed the instruction for JWT generation to the letter.

the URL for request (GET):

Sincerely hoping for some intake on that.

edit: neglected to mention that trying to use the "try it now" console option from the official documentation  with the example body and default headers, yields the exact same results -  error 104 (https://zfjcloud.docs.apiary.io/#reference/execution/add-tests-to-folder/create-execution?console=1)

thank you for your reply.

Sorry for the delay, I was away for the holidays.

Well I tried following your solution and to delete and reapply a new key and to send as a raw json.

I did not work however and I got the exact same result.

What did work was adding the cycleId in the request data itself.

From the documentation the cycleId is optional in the cloud API, however in the server API the cycleId is mandatory so this is where I got the inspiration to try it here as well.

This has indeed solved the problem and you can now close the post.

I do strongly suggest updating the documentation to reflect that the cycleId is indeed mandatory and not optional (or maybe change the request validation so the response is not an ambigious internal server error...) 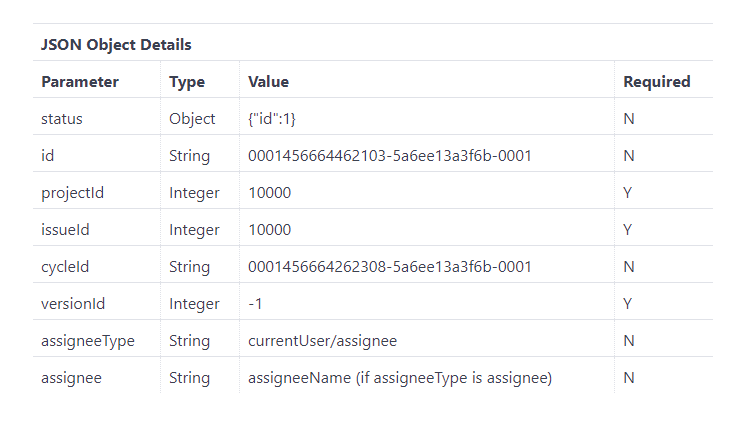 We've encountered the same problem and your solution resolved it @Talsht, thank you!

+1 to updating the docs, guys.

Could you please tell me what exactly did you send for update execution?

I have the reversed issue... creation of execution works but update does not work. I tried all I could think of.

Having the same problem with a PUT to update (not create) an execution. Were you ever able to solve the issue Chris?

What does your status object look like by chance?