There are only 2 ways to link a test to a configuration...either

1. select the test (or test set), open the link to items, select the configuration folder, and check each sub item (e.g. Windows8>IE, and Chrome and Firefox), repeating for each config folder.

2. select the configuration, open the link to items, specify type and folder, and individually check every item (test) in the folder.  Repeat for every configuration.

Even with just a few Windows environments, each with 3 or 4 different browsers, times our 2500 tests, and this is a monumental task.  While we could have done it as we created tests, our focus was on creating the tests, and not linking..that was a mistake.

However now, we need to make these links, yet we are looking at nearly 10,000 clicks/steps.

If nothing else, in the selection of tests (or sets) drop down, add a "Select All" to check all tests in that folder.  Then we would just need to repeat for each Configuration, each folder...a much more manageable task. 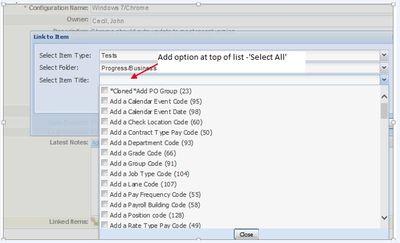 We are adding the Traceability option to Configurations (from the drop down menu) which will make it a little bit easier. However, with thousands of Tests I can see the need for something much more efficient.

A "check all" button is much needed here.

Any technical reason you guys didn't implemented yet?

I agree this needs to be improved.  There are several things like this in QAC that require hundreds or thousands of clicks/steps to complete which as OP pointed out a lot of overhead and incredibly inefficient.  A select all as one poster mentioned would be an improvement but there are other modern UI workflows that could make this better.

I've expressed the same thoughts on linking requirements to a release or linking tests to requirements. It's a very cumbersome, tedious process.  It would be great if they allowed the linkage information to be included in .CSV files that are used to upload tests and requirements.

We also have thousands of tests and have found whenever I have to link our 2000+ tests to a release or to a configuration, I do it on the back-end via SQL as the system(QA Complete application) chokes and cannot really handle the volume.

This may not sound like an appealing workaround but I have found it works.
What that does require though is some knowlege of SQL and using a loop with a variable in SQL (I had to do some searches to help).

So for example with linking 2000+ tests to a release:

DECLARE @cnt INT = 4; -- from Test ID (make a variable and set it to the first test ID I want affected)

So basically you may need to get familiar with some of the tables in the QA Complete database.

I found that once I did this I could use excel to create any kind of report I needed and also I could go through the back-end when making changes to large amounts of test data.

For Linking there is a table called "TraceabilityLinks"

You will also need some tool to connect with the QA Complete database and running queries (so you will need write access to the database) - for me - Microsoft SQL Server 2014 (but this may depend on how your application and database are setup... we have an on-premises version.)

Subscribe
Options
Announcements
Welcome to the QAComplete Feature Requests board!