I think 8.6 was running after the Windows Creators update (but I don't use it heavily, and the update was fairly recent so maybe not.) It was certainly running on this machine under Windows 10 before the creators update.

VS2015 told me there was an update to AQTime so I ran it. Licensing failed with message that I am running on a Virtual Machine (which I am not) and a node-locked license does not allow that. I returned the license the long way using the HASP_RUS_AQA route uploading and downloading files. But the new key still would not register.

I have all the Hyper-V options disabled in Windows.

Now I can only get the license to load if I go into UEFI and disable Intel Virtualization Technology. Doing that prevents VMWare Workstation running 64-bit guests, which is fatal for much development work.

I've tried putting 8.6 back, but I have the same problem with that.

Having the change the UEFI settings every time I want to use AQTime and the put it back to get on with normal work is just too much of a hassle. It looks as if the node-locked license system is not viable with current releases of AQTime and Windows 10.

The floating license system is just too expensive for single-user single-machine use, especially as I would have to run a dedicated machine somewhere with hardware configured specially for the license server. Maybe this is the end of the line for AQTime for me.

Has anyone else experienced problems with Windows creators update and AQTime licensing?

I would recommend to contact Support directly via the https://support.smartbear.com/message/?prod=AQtime form and reference this thread.

I also will appreciate it if you let us know the result as I am postponing Windows update but not sure for how long Windows will allow me to do this 🙂 and others may benefit from your result as well.

I had already tried raising a support ticket, but that seemed to go wrong (no confirmation email). I probably did something wrong. I tried again and got an instant confirmation.

They gave me a new registration number which did allow me to get it going again. During activation I got this: 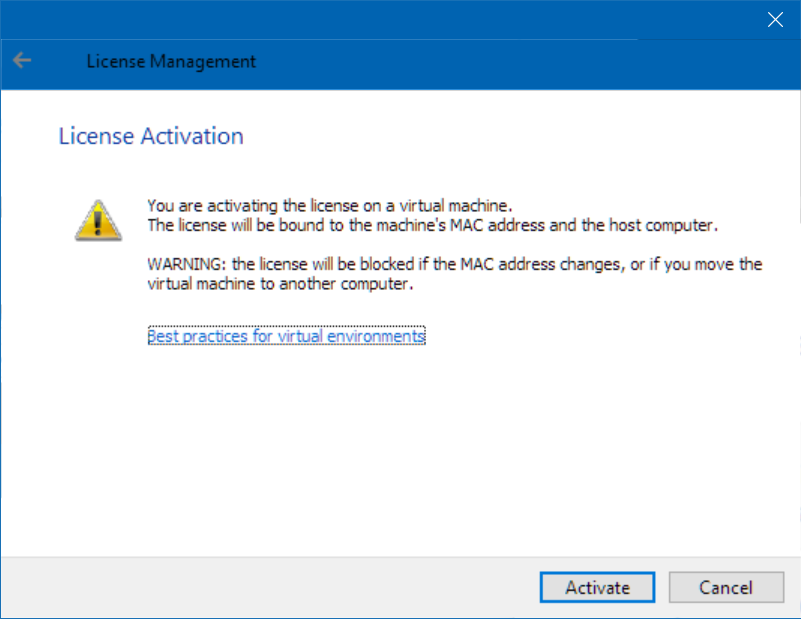 It seemed familiar, so I think I may have accepted it before under Windows 8.1 on the machine. Knowing it was difficult, I recall I returned the license under Windows 8.1 and re-activated it on Windows 10 without any problem. If that is the case, I don't think it was creators update that broke it.

Recently I concluded my WiFi card was faulty and I had it replaced under warranty. If the hasp/gemalto system looks at the MAC addresses of all the network hardware, I could see it breaking it. I wonder whether re-configuring the VMWare Workstation network adapter might also break it. I think that my returned license could only be activated with my old WiFi card installed and that was in the possession of Lenovo

It looks as if recent versions of Windows are always seen as virtual machines. That means that once you have activated a node-locked license under Windows 10 it will be locked to the hardware. You cannot move it to new hardware without help.

So, I don't think you need worry about creators update - just don't have a hardware fault!

Community Hero
In response to EricT

Great to hear that the problem was solved and thank you for the update.

> That means that once you have activated a node-locked license under Windows 10 it will be locked to the hardware.

Actually, this is how node-locked license works. It bounds to the hardware (disk, motherboard, network card) and checks on start whether they are the same. (Some variations are allowed to deal with the possible hardware failures - this is documented somewhere here: https://support.smartbear.com/viewarticle/42951/). And this is the reason of why it is not recommended to activate node-locked licenses on virtual machines.

However, I was wondered with this: "It looks as if recent versions of Windows are always seen as virtual machines."

I set up AQtime on the clean physical Windows 10 machine (no upgrade from 8.x or something like that) and never had a warning about virtual one. There is no VMWare on this machine but I have VirtualBox and likewise never had any licensing problem.

Maybe it is worth to create a new support ticket and discuss this problem with Support guys?