"Why re-run the failed tests right away? They failed for a reason. Either the automation was created incorrectly and they failed due to coding errors.  Or, they failed because a bug was found and needs to be corrected by the developers.  Either way, re-running a failed test automatically will rarely, if ever, do any real good."

I would love this ability too. I disagree with both the above and the assumption of a timing issue. Many times I have seen Windows or the AUT barf in ways that only occur under test runs.

[TechCorner Challenge #7] Retrieve Data from a Web Page
sonya_m
Take part in the weekly challenge by solving scripting tasks and show off your expertise!
See More
00159

TestComplete 14.50 is Available
TanyaGorbunova
A new TestComplete version is available for downloading. Check out what's new and update!
See More
00310 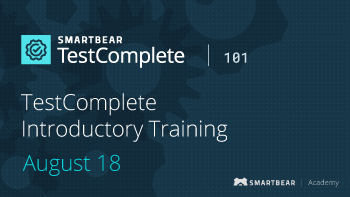